In 2015, we are standing at a turning point in the energy future of the United States.  Traditional fossil fuel prices go up and down but ultimately are steadily increasing in cost, while reserves deplete across the globe. The federal government has moved sustainable renewable energy to the top of its agenda.  At the same time, the price of solar electric panels has fallen significantly in recent years, turning what was once an expensive, exclusive luxury into an accessible, affordable income source for home and business owners across the United States.

The International Energy Agency predicts that by 2050 solar will be the world’s largest energy source.  Right now it is less than 1%.  If you could have invested in oil in the early 1900’s … would you have invested in it?  This is it!  Solar energy will be the largest energy source in our lifetime.  Solar Crowdsourcing is one of the best ways that we can guarantee that this technology continues to serve the interests of the general public.  Be a part of the changing world and get a piece of the future for yourself.

Our Community Solar Program provides solar electric panel access and income to US Households who currently are unable to install and benefit from solar electric panels on their own.  By collecting and gathering smaller scale solar projects onto one larger combined site, we are able to lower costs through economies-of-scale and optimized-project-sitting.  GPS project manages, monitors, and maintains the sites (to include designing, engineering, procurement, construction, and operations) and passes the savings on to our clients.

The Importance of Power

Electricity is an essential part of any business. As such, power costs generally take priority over most other payments. In fact, even in cases of bankruptcy, many businesses will continue to pay their electricity bills, so as not to interrupt their day-to-day operations.

Energy, the world’s largest industry, is undergoing a tectonic shift. It’s time to stop hedging our bets. It’s time to embrace the idea that we have the power to transition the entire planet to 100% Clean, Sustainable, Renewable, Energy.

The shift didn’t come out of nowhere. For decades, we’ve been developing better, cleaner, greener, energy technologies, even as the fossil fuel industry has (literally) dug itself into a very deep hole.

The biggest story is in solar. The cost for panels has fallen by more than 99% in the past three decades, from more than $75 per watt in 1977 to about 80 cents per watt today. 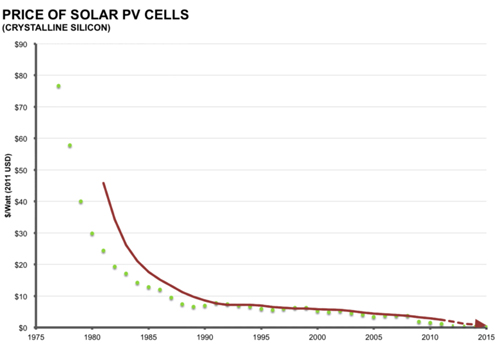 Meanwhile, as we’ve burned through the most easily accessible reserves, fossil fuel prices continue to rise. Coal prices have been steadily increasing … and oil prices have gone on a dramatic upward run. 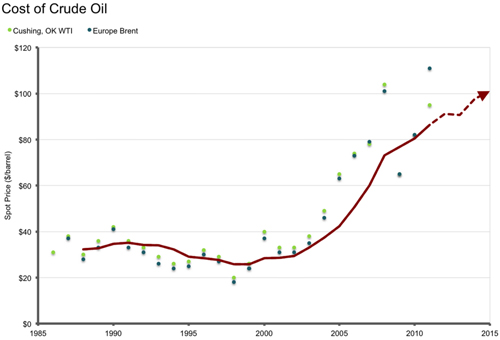 The overall trend is clear. Our energy world is turning upside down. All over the world, it’s starting to make more financial sense for people to power their lives with clean energy rather than dirty fuels.

Solar panel prices are now equal to or lower than the price of electricity from your local utility; allowing an opportunity for millions of Americans to go solar affordably. But it also means a potential transformation, a democratization of an electricity system long dominated by centrally-controlled utilities and centralized ownership and production of electricity. Solar now undercuts grid electricity prices, along with this 20th century system of centralized ownership, bringing economic sunshine and self-reliance to communities along with solar electricity. 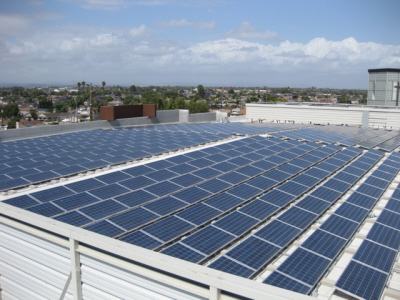 Despite the changing economics of energy, many still question the feasibility of large scale clean technologies. A common refrain is that renewables are too intermittent or too hard to integrate into the grid to quickly meet 100% of our energy demand.

In 2011, two professors, Mark Jacobson from Stanford and Mark Delucchi from UC Davis, asked whether we could run our entire planet on wind, water, and the sun. Like others who have conducted similar analyses, they came to the conclusion that there are “no technological and economic barriers to converting the entire world to clean, renewable energy sources.”  “What we lack,” they said. “is societal and political will.”

Make no mistake: the task is huge. In Jacobson and Delucchi’s model, we’ll need to build 90,000 solar power plants. Our roofs our going to have to shine, because we’ll need 1.7 billion rooftop solar arrays.  Globally, the amount of investment required is on the order of $100 trillion dollars. Put simply, building out a new clean energy infrastructure may be the biggest business opportunity on the planet.

The transition to 100% clean energy is inevitable

The only questions are how fast we can do it and who will benefit from the investments we need to make.

There are fewer sources of capital to finance clean energy projects. Of the more than 8,000 banks in the U.S., there are fewer than 20 that currently have a dedicated department for clean energy financing. And because there are so few banks investing, they are able to charge very high rates for their capital, making many good clean energy projects uneconomical. If we want a new energy system, we need a new financial system along with it. We need something that looks more like an ecosystem, with many diverse pots of money funding many diverse energy infrastructure components.

Do you know who has more money than banks? People do. And there are new opportunities emerging for us to put it to work.

Take solar:  Green Power Systems is leading the charge to make solar more accessible. Right here … Right Now … anyone from around the country can invest in solar projects on our platform. Ordinary Americans have $19 trillion dollars invested in their IRAs, quietly financing the economy of tomorrow. That capital has up to this point been largely locked out of clean energy.

If we take the opportunity to become investors in the clean energy revolution, people like you and me will become owners of the world’s biggest industry. Instead of being on the receiving end of power, we will be, in so many senses, generating power.  Imagine how profound this change will be.

100% is a movement about abundance and possibility. It’s about taking charge of creating the world we all want to see and driving forward the set of solutions we need so our children will inherit a healthier, happier and more prosperous world than the one we were born into.